Since the beginning of the global COVID-19 pandemic, the Ministry of Health and Welfare’s subordinate hospitals have been at the front lines in caring for 35% of Taiwan’s nationwide patient load, among which Taoyuan General Hospital (herein, Taoyuan Hospital), Ministry of Health and Welfare (MOHW) has treated nearly 20% of the nation’s confirmed patients. After nearly a whole year of heavy fighting against the epidemic, Taoyuan Hospital suffered its first confirmed case of a physician contracting COVID-19 on January 11, 2021. In the nosocomial infection incident, the final contact isolation ended on February 23; as of that day, the incident lasted a period of 44 days, resulting in a total of 21 confirmed domestic cases, including 2 physicians, 4 professional nurses, 2 patients, 12 family members, and 1 foreign caregiver. 1. On January 11, 2021, a physician (Case No. 838) in Taoyuan Hospital became Taiwan’s first doctor to be confirmed to have COVID-19. Upon the occurrence, Taoyuan Hospital immediately established the “Hospital Incident Command System” (HICS), with Hospital Superintendent Yung-Nian Hsu serving as Commander/Convener in charge. The Central Epidemic Command Center (CECC) dispatched its Expert Advisory Panel Convener Shang-Chun Chang to the site to ascertain the circumstances and provide guidance. The Taiwan Centers for Disease Control (Taiwan CDC) personnel and medical officers were also deployed on-site to investigate the incident; on the same night, the CECC Commander Shih-Chung Chen convened an emergency meeting to discuss response measures.

2. At this stage, the response measures deployed included:
(1) Inpatients may only be discharged but not admitted; all visits to the hospital were cancelled, and only 1 person may be allowed to accompany a patient, with real-name registration required.
(2) Patients who had been exposed to the confirmed cases were placed in individual isolation rooms and observed for 14 days.
(3) There was an expanded home isolation order to place health personnel who came into contact with the confirmed cases under home isolation.
(4) There was an expansion of testing to include the entire hospital staff and expansion of thoroughgoing environmental disinfection, along with upgrading of staff personal protective equipment.
(5) Movement route controls were enhanced, and wards were segregated by risk of infection control into red, yellow and green zones, with registration of personnel in each area in place to maintain controls, and patient ward segregation and traffic control bundling measures were also implemented.

1. On January 18, 2021, the CECC established an "incident command post" and assigned Pi-Sheng Wang, Director of the Hospital and Social Welfare Organizations Administration Commission, MOHW, to serve as the On-Site Commander at Taoyuan Hospital, with the post operational until February 7, for a total of 21 days.

2. This stage included the following efforts:
(1) Activating the "Clearing Plan" to clear out the inpatients and accompanying caregivers from the risk areas.
(2) Deploying chemical troops to conduct disinfection for all patient discharge and clearing operations, and the Sixth Army Command working with Taoyuan City to complete 7,000 instances of major community-wide disinfection activities.
(3) Home isolation measures were expanded and implemented rigorously. Patients were required to test negative before being transferred to other hospitals, and then admitted to a designated ward following transfer; they were required to be tested again before the isolation period expires or before being moved out.
(4) The "MOHW Taoyuan Hospital Retrospective Program" was implemented to expand home isolation measures to retrospectively trace contacts linked to the hospital cluster infection and place them under home isolation. At the end of the period, they were required to undergo testing and continue practicing the 7-day self-health management.
(5) The NHI MediCloud System indicated that a total of 3,327 patients had visited emergency and outpatient departments at Taoyuan Hospital after January 6, and another 3,028 hospital employees were placed under "self-health management".
(6) Patients who had already been discharged and required follow-up care were provided with telemedicine services through remote emergency consultation platforms.
(7) The CECC announced that all hospitals in the northern Taoyuan region would ban hospital visits from January 27 to February 9, 2021, except for special cases, and only one caregiver would be permitted to accompany any patient.
(8) This cluster incident altogether put 542 Taoyuan Hospital employees in isolation, retrospectively traced and placed 3,501 persons in home isolation, and placed 845 people under community isolation, resulting in a total 4,888 individuals under isolation; the same time period also saw 1,035 special quarantine taxi rides, conveying people in home isolation to seek medical attention or undergo testing. 1. On February 3, 2021, the CECC implemented the “Clearing Plan” for expanded testing of all hospital personnel (including contractors) and affiliated hospital branch personnel, giving PCR (nucleic acid) tests and serum antibody tests to a total of 3,024 people, while collecting hospital environmental samples. As of February 7, all the test results had come back for PCR tests of 3,024 individuals, serum antibody testing of 2,441 individuals, and 767 environmental samples of all hospital areas, and they were all negative.
2. After assessing that the risk of nosocomial infection had been resolved, the CECC announced that from 00:00 am on February 7, the designation of “self-health management” status on the National Health Insurance (NHI) cards of Taoyuan Hospital employees and patients who had visited the emergency and outpatient departments would be removed. Also, from February 8, the On-site Command Post was deactivated, with follow-up responsibilities handled by the Hospital’s Emergency Response Center for continuing operations. (The President of the Executive Yuan, Minister of Health and Welfare, and the Mayor of Taoyuan City visit Taoyuan Hospital for the "Recovery Operations Activation: Epidemic Prevention Team Returns to Work" event)

As the COVID-19 virus continues to mutate, increased risks of nosocomial and community cluster infection remain. It is thus imperative that Taiwan remember the lessons of this cluster incident to help prevent any recurrence of nosocomial infection incidents and that Taiwan concomitantly continue strengthening a firewall at borders, in hospitals, households and communities. The following suggestions are recommended:
1. Enhance nosocomial infection prevention and management measures, and strengthen nosocomial response frameworks.
2. Review strategies for epidemiological investigations, contact tracing, and specimen collection on a rolling basis.
3. Combine information tools to enhance hospital management efficiency, and conduct trial runs of APPs that remind contacts linked to hospital cluster infection to practice self-health management.
4. Optimize strategies for epidemiological investigations and specimen collection, and implement the home isolation measure of one person per residence.
5. Maintain vigilance among frontline medical workers and epidemic prevention personnel and prioritize vaccinations for them. 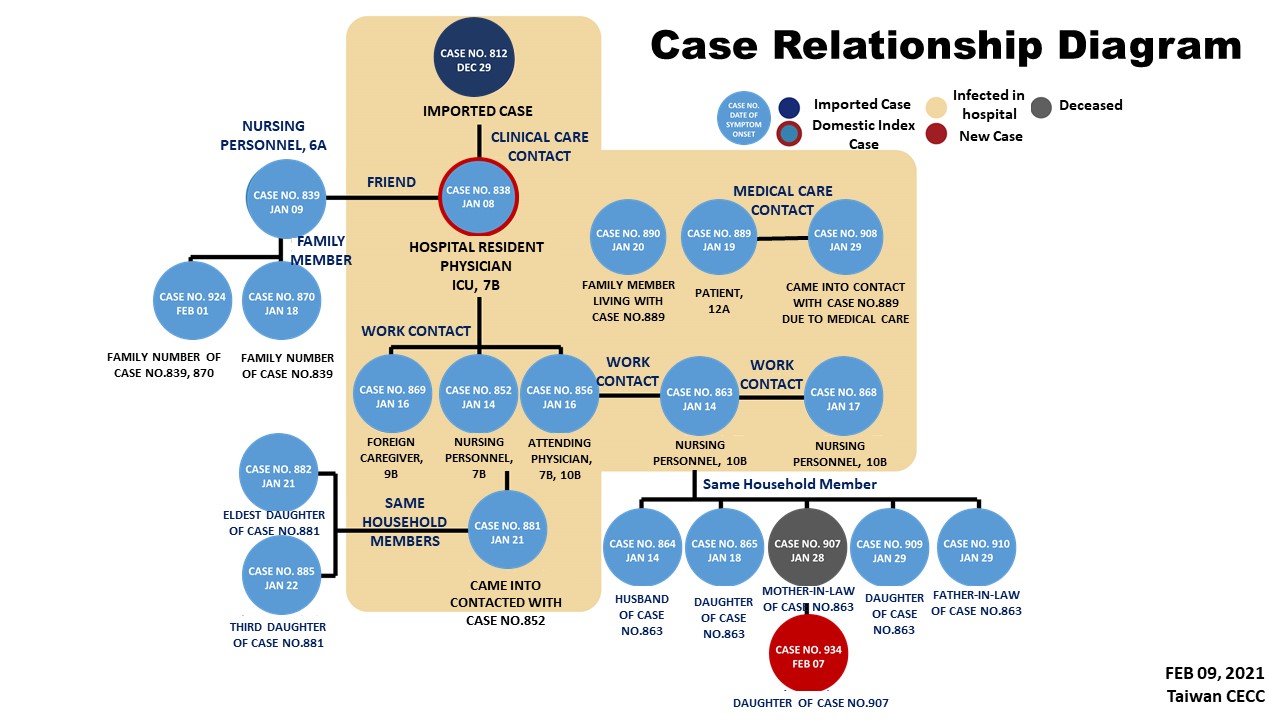 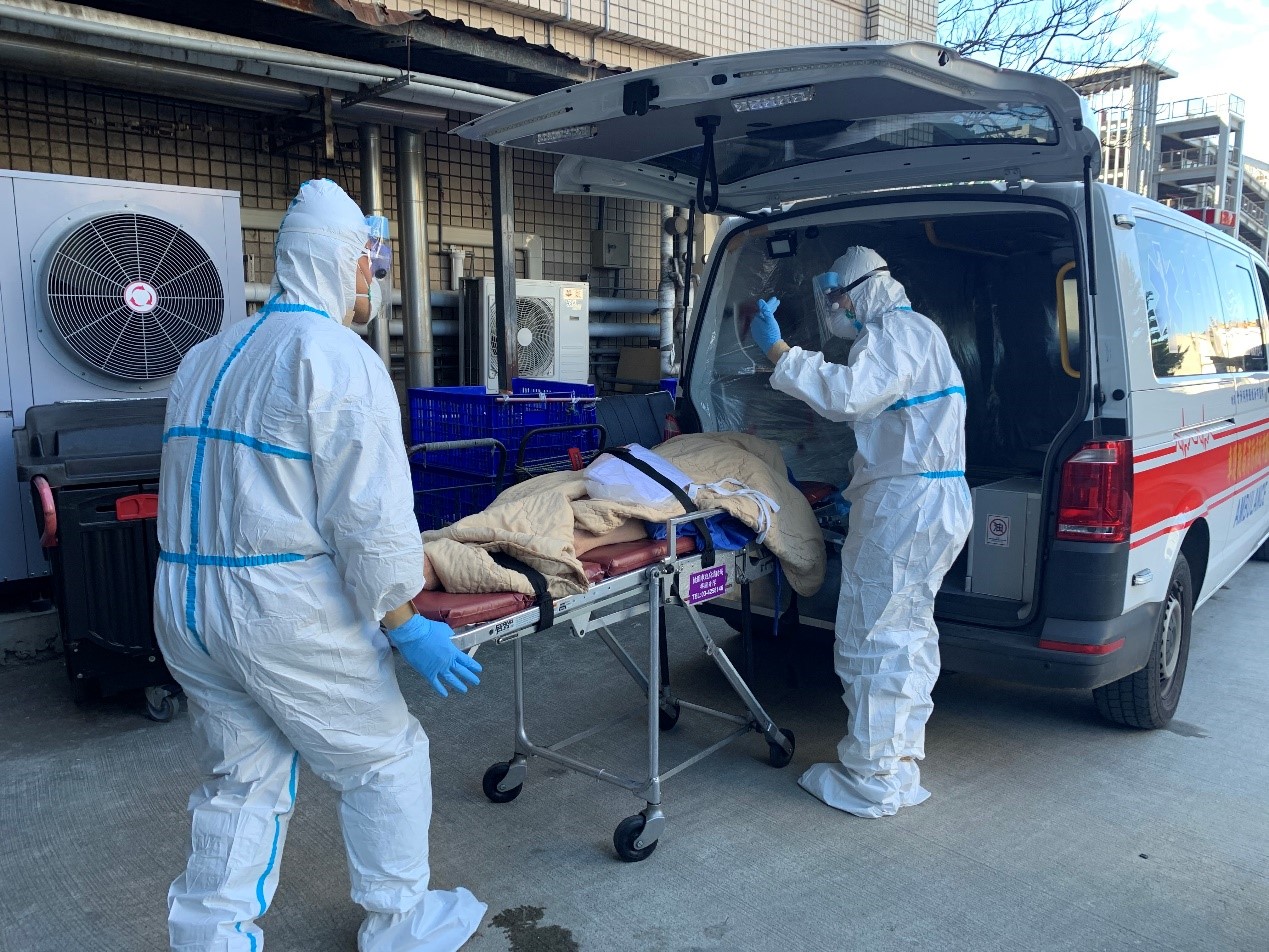